I have always been a huge fan of cover songs, even since I heard The Ataris cover Don Henley’s “Boys of Summer” on the radio when I was 10. There is something about the fresh take on a good song that draws me in.

I have rounded up and listed my favorite cover songs (the ones I could think of off the top of my head).

Are you a fan of cover songs, too? Any awesome covers I should check out? Let me know!

I See Stars covering The Outfield’s “Your Love”

New Found Glory covering Sixpence None The Richer’s “Kiss Me”

I love NFG’s pop-punk take on such a beautiful, romantic song. Instead of slow dancing to this one with your boo, you two can jump around to it. Plus, Hayley Williams makes an appearance in the music video.

I think I will love this song forever. It’s my favorite driving-with-the-windows-down song.

Bastille covering City High’s “What Would You Do”

I heard this song for the first time this week, and I fell in love with this band’s darker take on a R&B/hip-hop song. And the lead singer’s English accent, too. 😉

I am actually not positive which version I enjoy listening to more. While The Postal Service gives their song a electronic beat with a faster pace, Iron & Wine slows the song down, plucking it all out on nothing but a couple guitars.

fun. and Hayley Williams covering Gotye’s “Somebody That I Used To Know”

This is another song that has me questioning which version I like more! The original is beautiful, but this cover done by fun. and Hayley Williams is more raw, using an acoustic guitar and a piano (of course) to guide the song. Also, I’m not usually a fan of songs performed lived like this version, but I personally think this is uh-mazing.

The Hoodies shine a slightly indie-pop light on this T-Swift jam. Plus, their name is The Hoodies. Everyone loves hoodies.

The guitars are heavy in both versions of this song, but they are even heavier in the Escape The Fate version, making it that much sexier of a song.

OK, this one is sort of a guilty pleasure because it was in a movie that I’m too embarrassed to mention here. BUT it is still a great pop cover more geared toward younger listeners.

Rowan’s campus is small, so you know basically everyone

But sometimes it snows a little bit, so we get a snow day.

But when it blizzards, we have classes until 1 p.m.

Trying to get into Landmark on First Friday is insane.

The place is overflowing with people…

…so trying to get the bartender’s attention looks something like this.

But not Rowan Hall, because Henry Rowan makes sure he maintains that building with donations!

And there isn’t enough room for students to live on campus.

But despite everything, we are all Profs. And Profs stick together…or something.

Some days I wake up super charged and flowing with good ideas.

Today…was not one of those days.

From Wednesday through Saturday, I attended the College Media Association’s conference in New York, a conference that brings out the staffs of newspaper, magazines, and yearbooks, from all over the country.

Every day, there are many different lectures relating to many facets journalism, from editing to graphic design. These lectures, or workshops, are taught by significant figures in the journalism field. 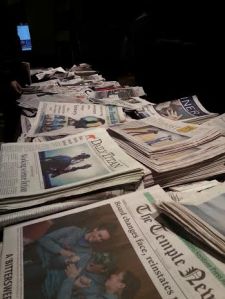 A picture I took of a table holding college newspapers from all over the country.

I had an absolutely amazing time! I met so many interesting people and learned so many useful things that will help me upon graduation. 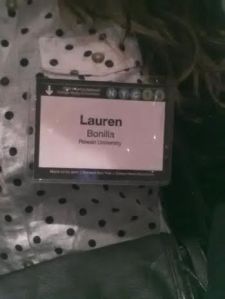 This photo was taken before I learned how to properly wear a nametag in one workshop.

I’m still afraid of the future, but after this weekend, I’m a little more hopeful and confident that I can make it in journalism.

I also created a website with my writing samples on it. Check it out: http://laurenbonillablog.wordpress.com/

On Friday night, award-winning novelist Neil Gaiman came to speak at my university.

Gaiman, author of well-known novels and books such as “Coraline,” “The Graveyard Book,” and “American Gods,” conducted a lecture that focused on the creativity of writing. He read some of his short stories and poems and answered a few questions about where his inspiration and ideas for stories come from. His answer was “You can get them anywhere.”

He proved his example when he read us a great poem called “The Day The Saucers Came,” which came from his experience staying in a hotel where the Internet was down.

That day, the saucers landed. Hundreds of them, golden,

Silent, coming down from the sky like great snowflakes,

And the people of Earth stood and stared as they descended,

Waiting, dry-mouthed to find what waited inside for us

And none of us knowing if we would be here tomorrow

But you didn’t notice it because

That day, the day the saucers came, by some coincidence,

Was the day that the graves gave up their dead

And the zombies pushed up through soft earth

or erupted, shambling and dull-eyed, unstoppable,

Came towards us, the living, and we screamed and ran,

But you did not notice this because

On the saucer day, which was the zombie day, it was

Ragnarok also, and the television screens showed us

A ship built of dead-man’s nails, a serpent, a wolf,

All bigger than the mind could hold, and the cameraman could

Not get far enough away, and then the Gods came out

But you did not see them coming because

On the saucer-zombie-battling gods day the floodgates broke

And each of us was engulfed by genies and sprites

Offering us wishes and wonders and eternities

While giants feefofummed across the land, and killer bees,

But you had no idea of any of this because

That day, the saucer day the zombie day

The Ragnarok and fairies day, the day the great winds came

And snows, and the cities turned to crystal, the day

All plants died, plastics dissolved, the day the

Computers turned, the screens telling us we would obey, the day

Angels, drunk and muddled, stumbled from the bars,

And all the bells of London were sounded, the day

Animals spoke to us in Assyrian, the Yeti day,

The fluttering capes and arrival of the Time Machine day,

You didn’t notice any of this because

you were sitting in your room, not doing anything

not even reading, not really, just

looking at your telephone,

wondering if I was going to call.

It’s fun to dream, and oftentimes, whenever I am scraping a penny on a lottery scratch-off card, I can’t help but actually put thought into what I would do if I won a hefty amount of money.

Some say that would buy a huge house in some beautiful place, like on the beach, on a mountain or in a city.

Others say they would buy things like their own shark or zebra or 50-foot gumball machine.

I’d give some to my family and move us somewhere better.

Buttttt, I would take the remaining money and buy pretty much everything in a craft store to finally get a start on all of the DIY crafts I have ‘favorited’ and ‘pinned.’ I would also buy every ingredient in store to bake and cook fabulous desserts and meals. But first, I would have to hire someone to teach me how to cook. 😉

Here are some of the crafts and desserts I hope to get started on soon, whether I win the lottery or not!

END_OF_DOCUMENT_TOKEN_TO_BE_REPLACED

The mood you wake up oftentimes sets your mood for the rest of the day.

Start your day with a smile by waking up to these happy tunes!

Big D and the Kid’s Table–Shining On